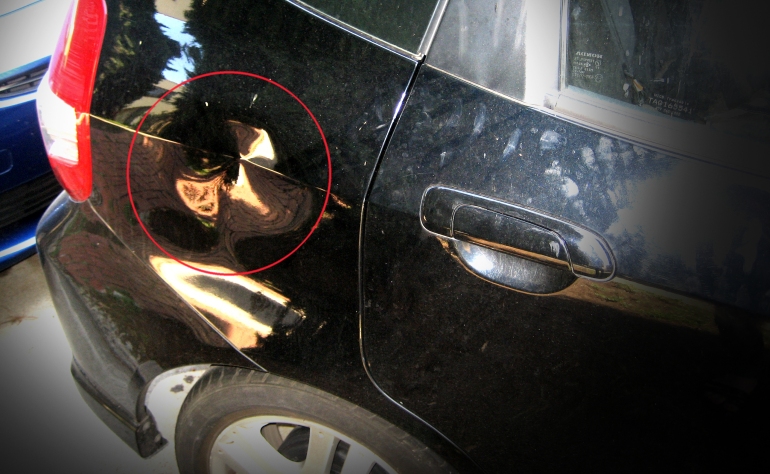 I use the term “hobo” somewhat affectionately. As the abbreviated “homeward bound”, it seems hopeful. Of milder consequence than “derelict”, “bum” or  ye olde “tramp”.

I have a long history with hobos. Dating back to the late nineties when I offered a “homeward bound” fellow in my college dorm dumpster a simple sandwich. “Excuse me, would you like a sandwich?” He replied “My name’s GATOR!” and left within seconds.

There was the time I exited the NYC subway, en route to work, only to come upon a hobo “flicking his beans” for the morning rush hour commuters.

The time a hobo called to me across the street one morning on my way to brunch, “I don’t like your earrings!”

Cut to this past Saturday, after my final UCB level 2 improv class on Santa Monica Blvd. I waved goodbye to my classmates when one stopped me and said “You should look at this.” (See above). He had seen a hobo head-butt my car window five times. When it didn’t smash, he head-butted the rear panel of my car. And made a dent. WITH HIS HEAD. I was impressed. Did he have a metal plate in his skull? Was he a karate master? A police report was filed. The officer at the station asked if he was a drunk Mexican — that they had picked him up and he was in custody in back. I said “…Does he have a big welt on his head? Then it’s him.”

This case will never be solved. I didn’t see the guy. And the officer marked me down as “M” in the male/female box. I said I was a lady. He fixed it. And I went on my way.