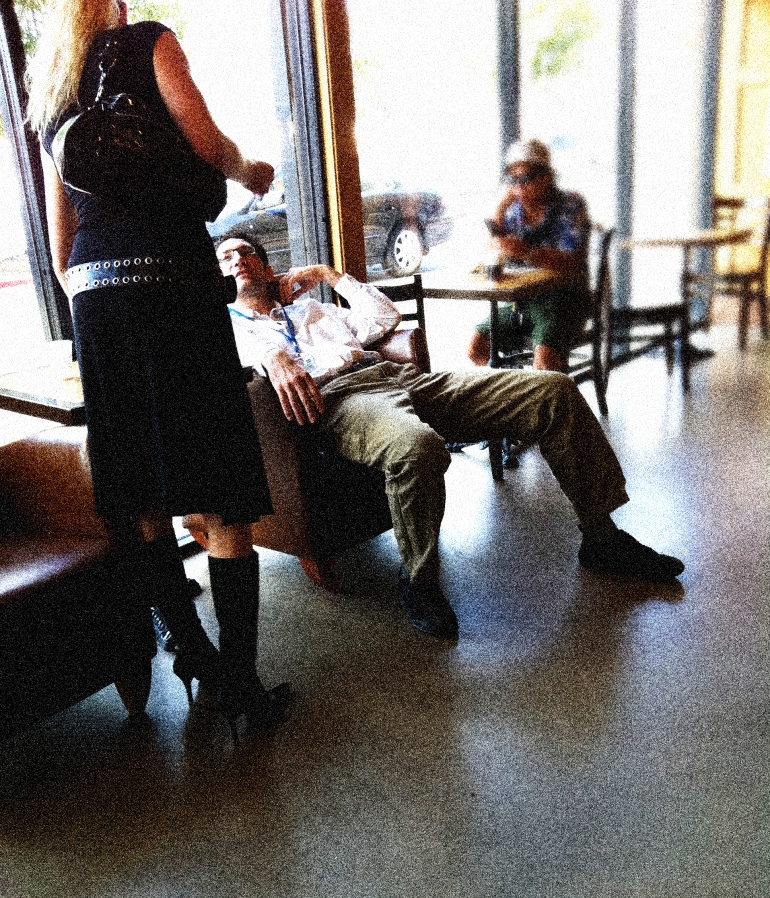 The day started like any other. By getting elbowed in the face by a couple making out at the counter of Coffee Bean and Tea Leaf. Ah, romance. I felt a little like this in the moment. The guy didn’t even notice that he jabbed me and it’s as if his elbow said “Being single sucks! Here’s how much!” Hiiiii, I’ll have a chai latte with soy… and also a scalding hot espresso for my new friend Elbows Kissingface over here… (That’s him reclining after tonsil hockey. Flaunting the elbow.)

But things were about to get way better. And karate-er. And there would be craft services. And makeovers. And hot gaffers. Yeah!

That’s me on the left, driving to the shoot, fresh faced and Unibomber. And that’s me on the right, after a just spritzle of Evian. *Also a whoooooole lotta makeup and no Evian. I am: “PBS/Sprout Network MOM”. (Sweet! They left my moles on!)

This is the shirt that MOM wore on set. A buttery delicious, perfectly fitting James Perse number, which I recommend we all break into our piggy banks to buy. Immediately. I lusted after it all day. 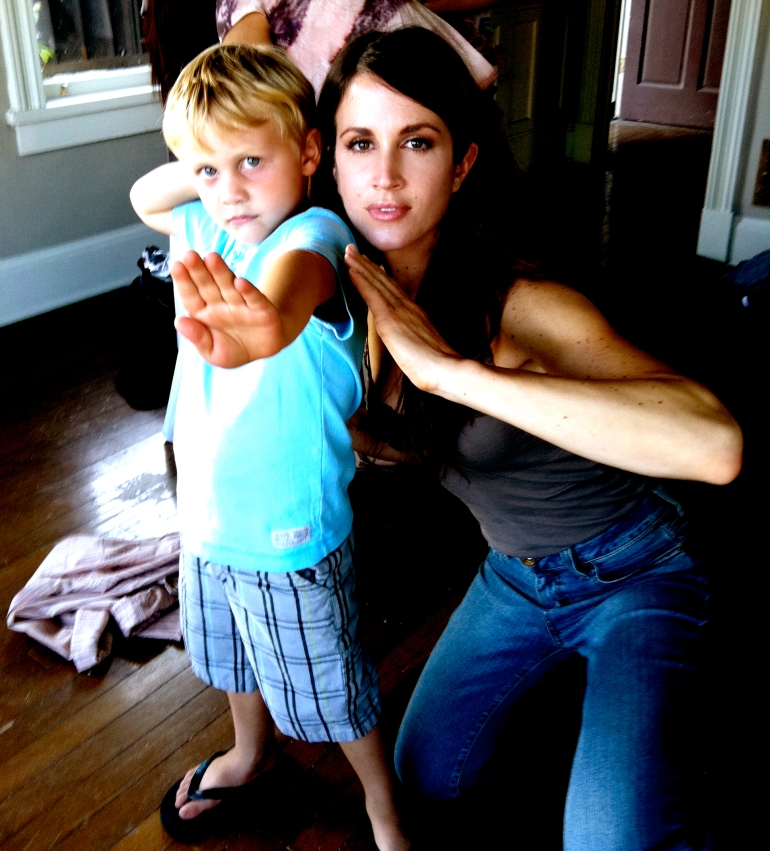 This was my “son” for the day, 5 year old Jett. He was pretty awesome. A self-professed karate guru, he taught me all the moves he learned from his older brother. He would walk by me and ask “Did you practice all the moves I teached you?” When I showed him what I’d learned and asked if it was good, he said “……Good enough.”

These are peaches marinated in lime juice, with Greek yogurt. Craft Services wizard Maddy brought snacks around during the day, like a cocktail server at a fancy party. I kept saying “Maddy! This is awesome how you bring things around to everyone!” After my third-ish time repeating my amazement, Maddy asked “Is this your first time on set?” I said “……um… no…? No…well, my first time on set in LA, since I moved here from Portland, where I’ve, um, worked before…” She said “Oh! Ok, ’cause this is a normal thing here, to bring snacks around to the crew all day long.” WHAT. I could get used to this not having to move my legs to get food.

We shot my scenes. One solo, one with my husband and karate-son. Everything went smoothly until Karate had too many cookies and was jumping on his fake Dad’s feet and hugging me and telling me “You’re so soft”. He was clearly high on Oreos. He was also calling “Action” before the director did. Finally they let him actually call it and it was pretty adorable. “….aaaaand ACTION!” So cute with his tiny little voice.

Money shot: I met REAL Barney! Spoiler alert: he is made up of two people. The guy in the suit and the guy who does the voice. They were both on set. It was strictly forbidden that the kids see Barney get into or out of costume. And when he was walking through the wires and lights to get into position in front of the camera, he walked LIKE Barney. All bouncy and jaunty. He was always in character. Barney’s humanoid duo were a couple of lovely actors from Dallas. Who were kind enough to let each and every adult on set grab a photo with him.

I think we have the same teeth.

Another spoiler: That house behind us is FAKE! It’s just a front. From the back, it’s all hallowed out and full of weeds. We shot in a series of fake houses on a fake suburban block, at Downey studios.

We finally wrapped for the day and hugged our goodbyes. It’s always a good time on set. It’s work, but it’s satisfying. I hope I get to do more of it soon!

$5 to anyone who correctly guesses what my other arm is doing. (Wink!)