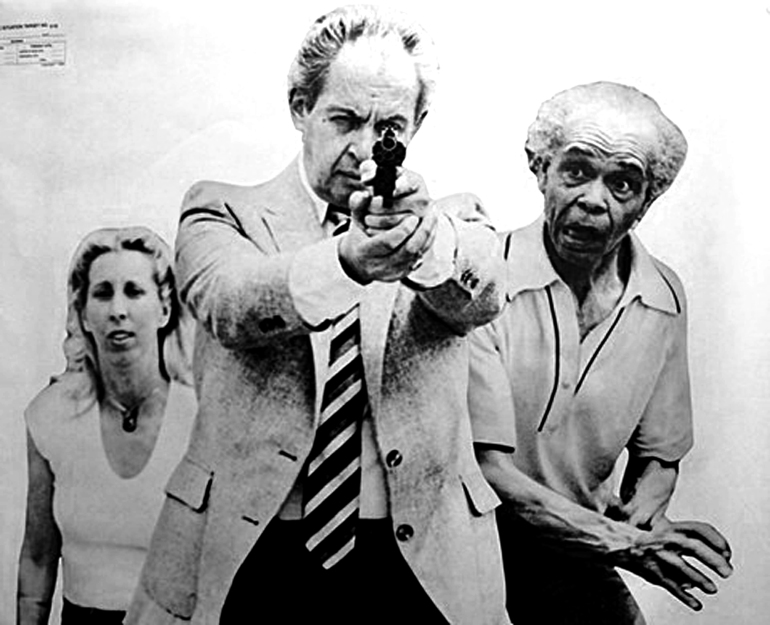 You’re a sniper. Who gets it first?

A. The man in the ill fitting suit jacket.
B. The woman just bummin’ some smokes.
C. Sherman Hemsley.

*This is an actual police shooting target – I love it – available here!

Next up, two guns, two mustaches and jazz haaaaands. Shoot!

I’ll be taking a lesson at LAX Firing Range and I’m just…preparing. I went to a firing range once with my friend on Valentine’s Day. A perfect celebration! It’s scary, holding a heavy loaded gun until you realize how awesome you are at aiming. By the end of my last session, I was putting earring holes in my target’s ears… Well, I’m not gonna shoot him where he could be seriously injured! Just cosmetic shots.

And maybe I put one in his medulla oblongata.

Killer combo w/ @clevelandberto !! Unleashing my inner badass — who isn’t sweaty at all and has great hair even after a workout 😂😅🥊🥊🔥
LAST ONE I promise 😂 Wrapping up an awesome year touring the festival circuit with a nomination for **BEST COMEDY** at LA Festival of Cinema 2020! I was so freaked out for people to watch this film a year ago and now I can appreciate the beauty of someone connecting with my art. (Or not! LOL no big deal *cry* bye!) But it’s my greatest thrill in life when people laugh at my writing. So much love to everyone who made it happen ............. "Sorry For Your Loss" starring @ryanpowerz @timtrue @heatherankeny @jean_st_james @rushikota @taylervee @mariansorensen @jrtshow @ilikelauren and Angel Sabaté. Produced by @ryanpowerz @nataliebritton4 @queensgambitfilms. Casting by @jasonstamey. Cinematography by @mattlynncinema. Editing by @seegz887. Hair/MU by @camercado6. Original score by @ervt. Written and directed by @ilikelauren 🌸⚰️🌸
My niece dancing it out for mine and my sister's bday week 💗😂🎉#aquarius for #life
Wrap on the @brianneallucero-directed short "Meta Woke!" I pitted-out my yellow sweater *every day*, filled in as the sound guy, and loved every minute of it. New friends, talented mofo's, all ready to work. 🙌💗
I used to share this hi-fi gingerbread house-making vid bc it’s a hilarious time capsule of my family in the 80s (starring @lesliev w the bowl cut). But this time, I’m sharing it because Patti “The Gingerbread Lady” passed away this year. There has to be a special place in Heaven for people who devote their lives to bringing pure joy to children. And candy. She really had her finger on the pulse of what us 80s kids were into 🍭 My mom wrote this song, we’re all singing on it, and there’s a glimpse of my youngest sister Kelly being held by my dad, back when she was still around too. 💗
Personal triumph: I figured out the hook and eye closure in my Spanx! 💁🏻‍♀️ ALSO: So much fun celebrating our good friends Jo and Mario in their next chapter — and making new friends along the way! #jowedsmar 🥂💗