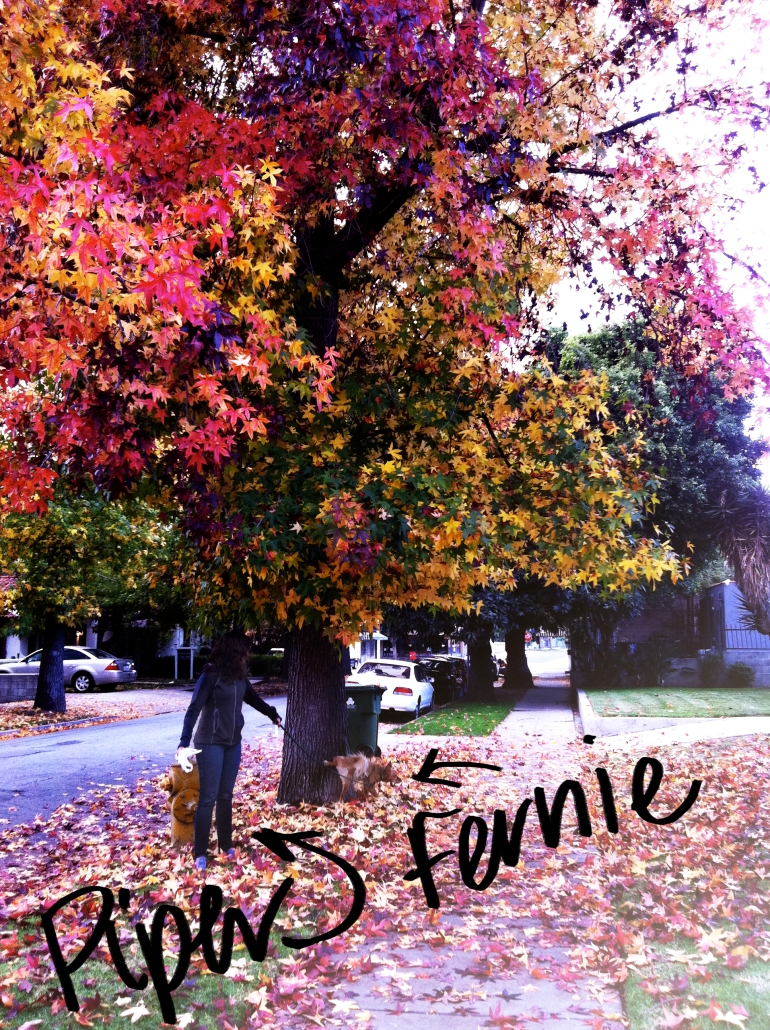 My good friend Piper drove down from The Bay Area (I still feel like an imposter when I say that because I’m not sure what it encompasses) to spend Thanksgiving weekend with me! She brought fancy wine, delicious homemade ginger cookies and her pup Fernando. We had spent Thanksgiving together last year, too. Because I was driving down to live in LA. Black Friday was my year anniversary. This Thanksgiving, I was thankful to have made it one year in LA – mostly alive.

To kick things off, we drank a bottle of champagne, watched the end of the Macy’s Parade (and the dog show!) and then went for a walk. We found the nearest (and only) autumn tree and peed on it. (Well, Fernie did.)

We hiked up to Barnsdall Park and took in the gorgeous view (that’s Griffith Observatory on the hill over there. To the left of turkey cloud. Then it was off to our dinner date with my friend Alice’s family. She invited me a few months ago saying “It’ll be weird, but fun.” I put it at the top of my list.

With my family living 3,000 miles away, I sometimes feel a little anti-celebratory of Thanksgiving. I haven’t been home for it since I was in high school. I’ve shared Thanksgiving dinner at friends’ homes, not at all, or that one time at Denny’s with my Ma-Ma and Pop-Pop who were visiting me at art school in Florida. None of us had thought ahead on that one. And it’s still one of my favorite memories. You haven’t lived until you’ve enjoyed the “Thanksgiving Plate” at 5pm in a booth with your grandparents. Who adore you.

As Piper and I drove to the house, realizing it was just a few blocks from the Santa Monica beach – and drenched in the most brilliant orangeyfuchsia sunset (straight off an 80s beach towel), we thought this might just turn out ok… 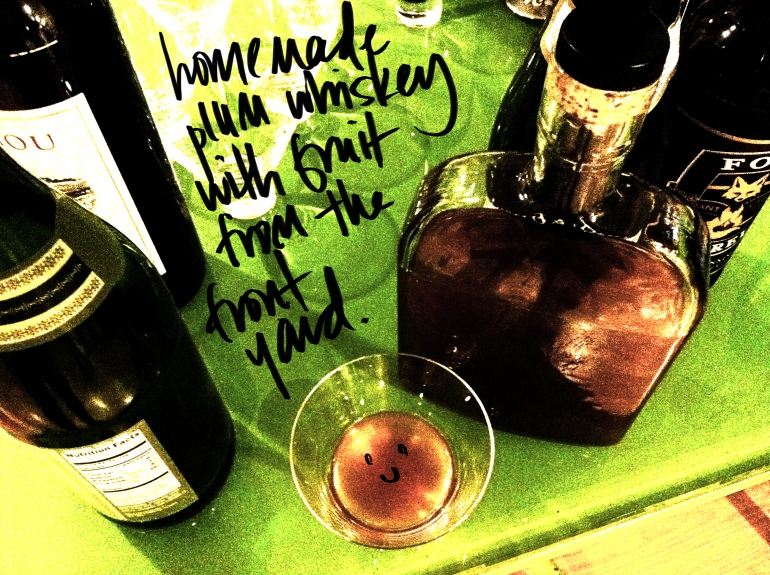 We were warmly welcomed by Alice, her Dad Tom and her Mom Sandy, who made the most killer plum whiskey — from their plum tree. From their YARD. (What are these things!) It was delicious. I had to keep reminding myself that just because it tastes like fruit, it’s stiiiill whiskey. {Belch} What? 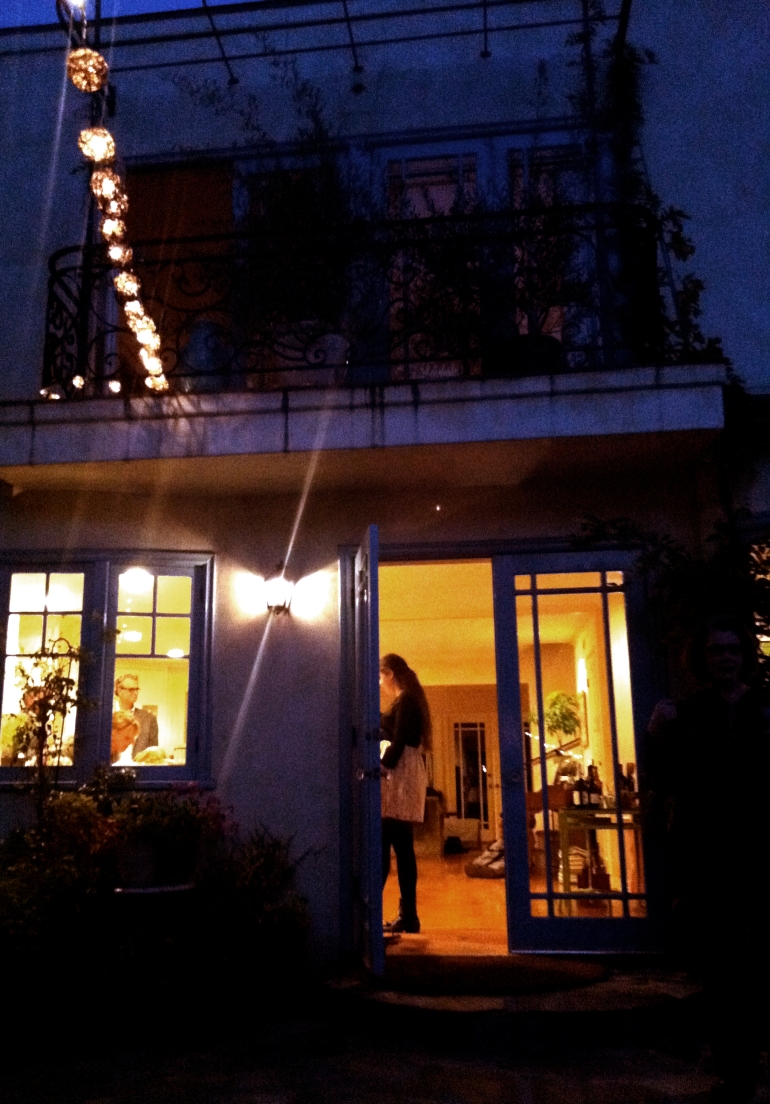 There was a fire in the fireplace, a feast prepared, a big sweet yellow lab and lots of laughing and mirth!

When in Rome… take your picture with the turkey like everyone else does! This is the kind of family tradition I can get behind.  A solo shot with the bird – everyone – every year.  This is Isaac. He’s 11. He told me the story of his first kiss. He’s not even old enough to be the age when I had mine. But his involved getting punched in the face and throwing up, while his friend pooped himself. Mine involved braces, a rec room, “No Rain” by Blind Melon and not as much punching. 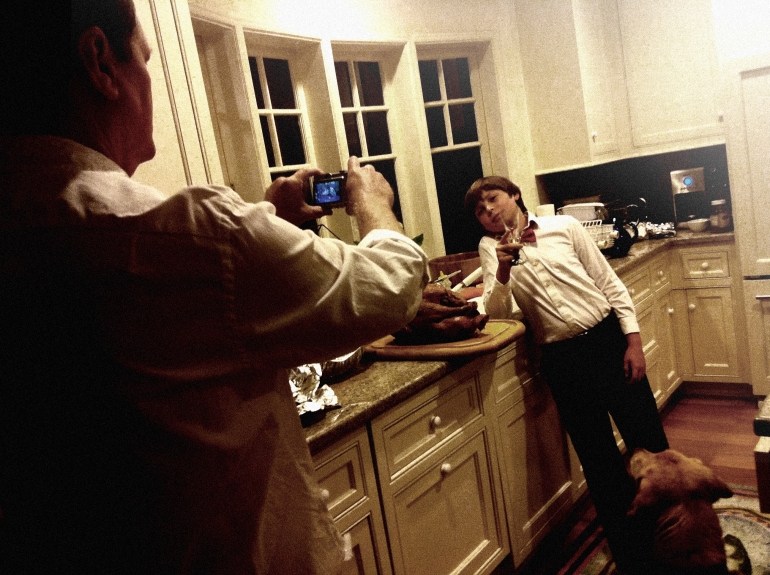 Piper and I ham it up with the turkey. 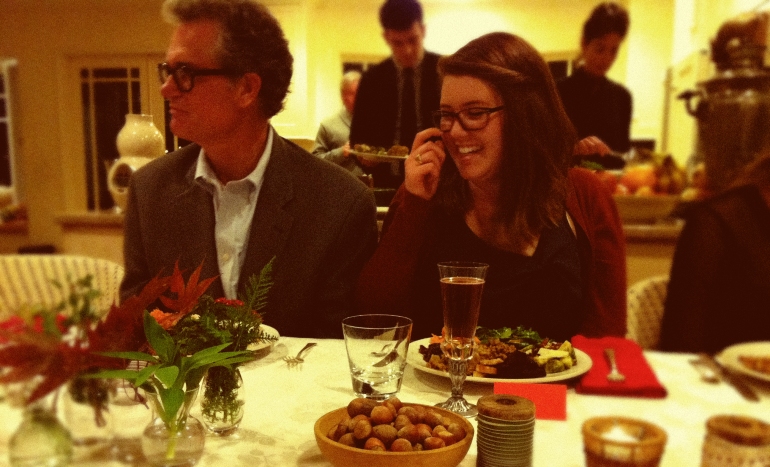 Alice sits next to her Dad, Tom Gammill. Maybe you know his writing from, oh, I dunno… SNL, Letterman, The Simpsons, the new Napoleon Dynamite animated series. He is hilarious, as is his writing partner Max, who hosted the evening with his wife Mira. And so is Alice and her brother Henry and her Mom. Actually, this whole table was full of jokesters. I loved it. 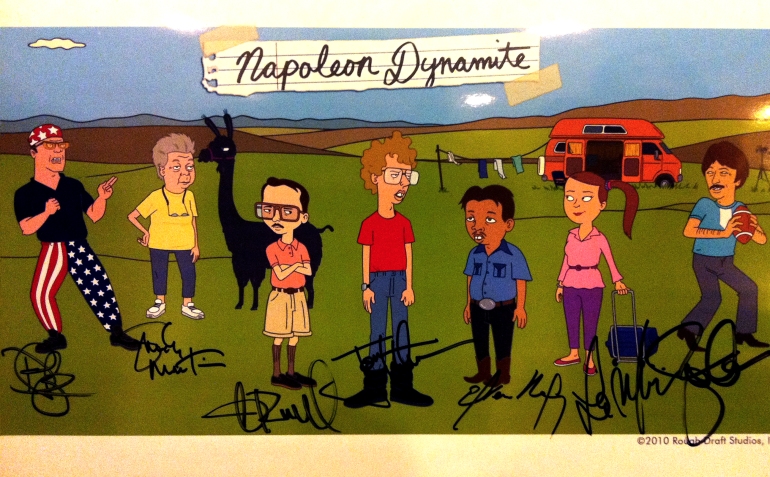 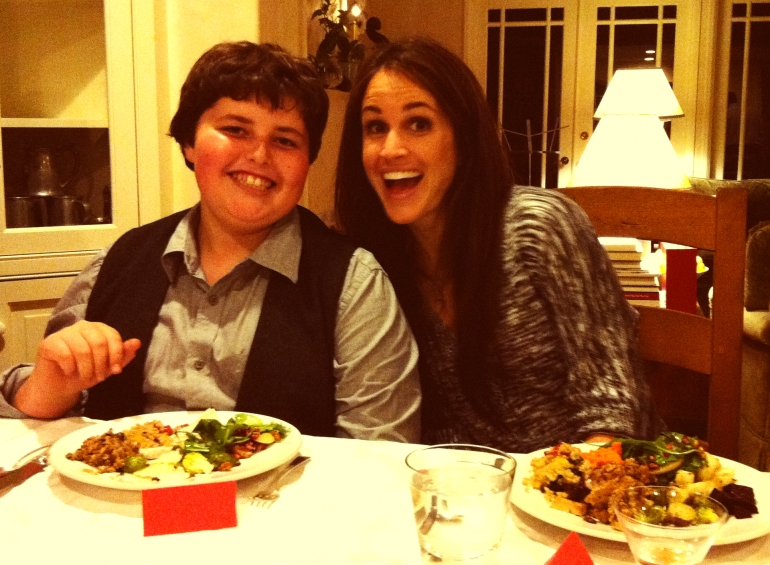 That’s Gabe. He’s 14. And in this picture, he’s humoring me by posing with an elderly person – ME. We had a brief, but intense conversation where he informed me that “After 30, you’re done. You’re an old maid.” Oh Gabe. You’ll make a fine casting director some day.

OK, confessions. I fell off ye olde dietary wagon at this meal (–And consequently the weekend. At one point I ordered a ham and cheese croissant because it sounded so perfect and when it arrived, I remembered I don’t eat any of those things!). Our dinner was so thoughtfully prepared. Most of the options were vegetarian. Actually, all of it, minus the turkey. The meal was DIVINE and had everyone listing ingredients from their gardens.

But here… Myeah. I have my grandmother’s sweet tooth. Like a siren calling to me in the dark of night.

I wanna say that I shared that plate. But no I did not. I did not, my friends. I ate all of it. Except for like a spoonful of ice cream pie that I made Piper take so that I could feel less guilty (wink!).

It was one of the most lovely orphan-Thanksgivings I’ve shared with anyone. We walked away with containers packed with bourbon sweet potatoes, quinoa salads and roasted root vegetables. Hugs and invitations to come back next year. Feeling really lucky to share in a meal and a lot of laughs with that amazing family.