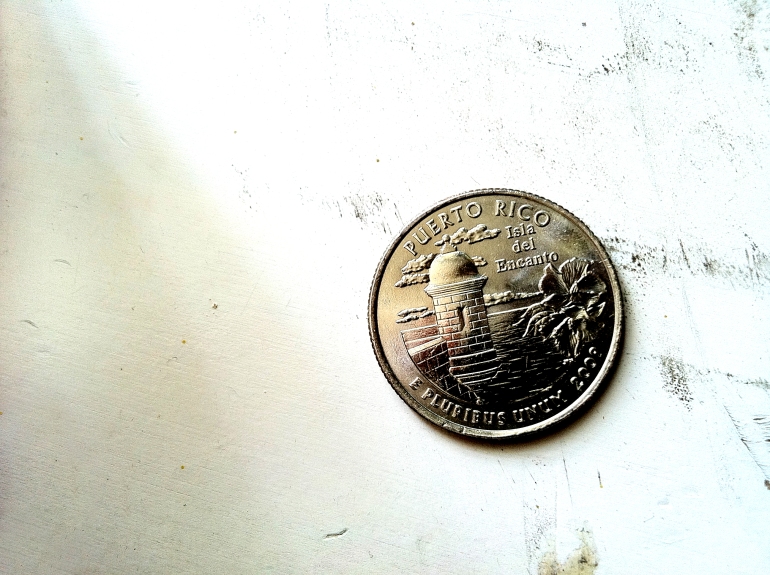 Ever seen the back of a Puerto Rican quarter? OK, it’s a U.S. quarter, but with an image of the ocean from a sentry box in Old San Juan. I got to stand in one of them… along the striking fortress walls high above the crashing waves. Not only was this box at one time a hideout for spotting enemy ships, it is currently a great place to spend the night if you’re homeless. Mine smelled like pee. Which reminded me of NYC. Which made me nostalgic. And a little barfy. 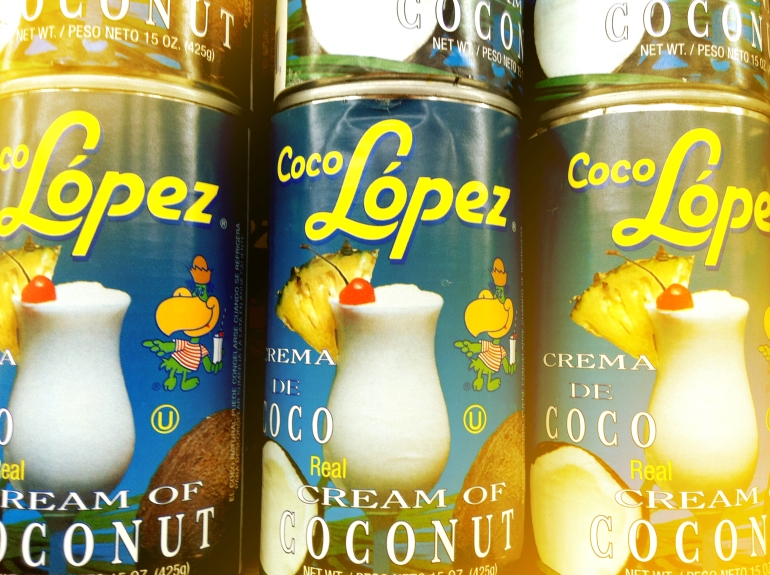 This is coconut. Also available in the States. But I licked it first, so it’s my stripper name. Tonight at Ricky Moonlight’s: Coco López and the Feather Twisters.

We visited the family farm, our 5th day on the Isla. Green rolling hills and pastures, horses, bees, snakes, butterflies and cows. My best friend growing up lived on a dairy farm. We spent hours feeding the calves, making tunnels in the hay, pretending kittens were our babies, eating too many Doritos right before bed. I thought — I got this. I’m like a cow whisperer. Also, they’re cows. They just want to stand where they are and munch some grass, right? 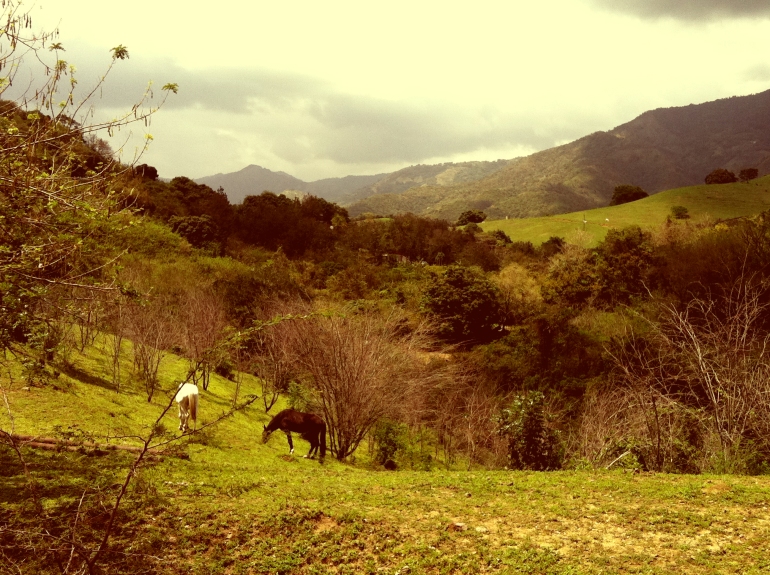 See how tiny these horses are? And how there are no cows in the picture?!? That’s how close I got to the animals. NOT CLOSE. Seriously, the cows saw me walking toward them and – I am not exaggerating – they looked up at me from their grazing, with a startled motion, and then did like cartoon bug-eyes and lurched away in a sprint to the farthest reaches of the lawn. Where they stood very still, watching me with one eye.

My heifer-whispering career in the tank, I moved my sights elsewhere. Oh here! No suspicious cows to make me feel like the neighborhood pariah. 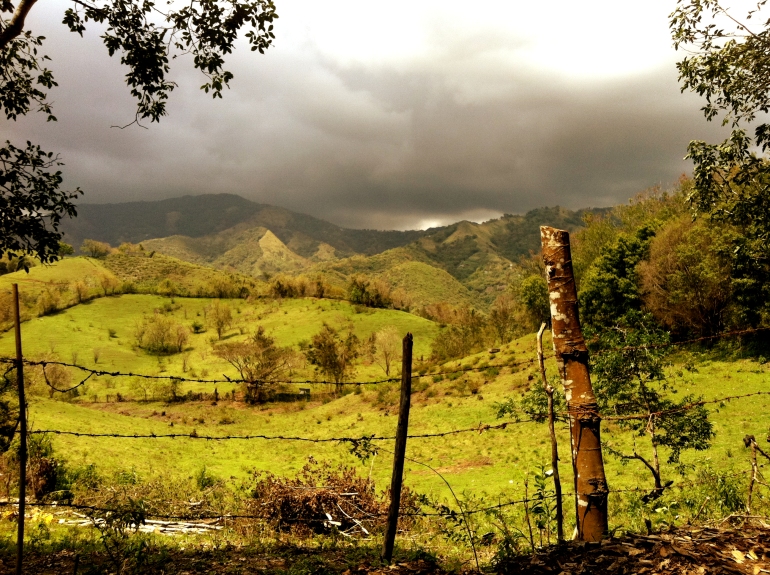 An uncle joined Ervin and his Dad. I made them pose for a picture. “Un photo, por favor? Gracia. Ok. Uno, dos, tres…” Ervin’s Dad uses the crutches because he’s got one leg. And he manages all that land and those skittery cows with ease. I’ll try to think of that when I think I can’t possibly make it up all the stairs to my apartment. 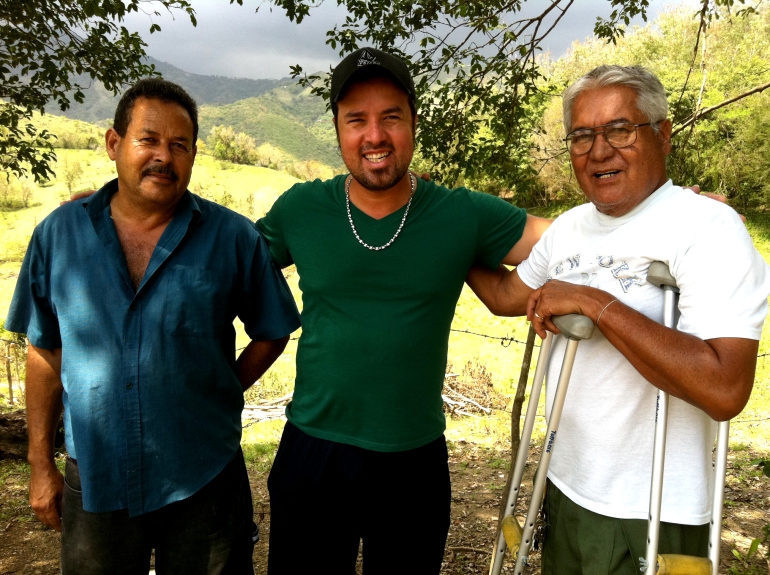 We were all hungry after workin the land (I didn’t do anything but almost step on a snake in flip flops. I was in the flip flops), so Ervin said we were going to this lady’s house to pick up some yucca balls. I’m not from a place where you go to other people’s houses to get your food, and I wasn’t driving the car, so I mentally agreed. I usually agree with any food in the shape of a ball. 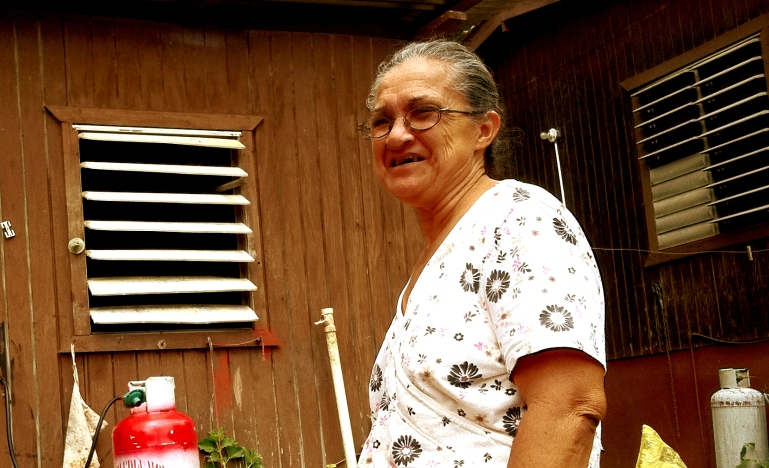 Here was our gal. She and her husband, in a little house on some land with a dog and chickens. We pulled up and she knew the order because Ervin’s Dad had called it in, 2 weeks in advance. She is like THE place to get these balls, which are filled with meat, which you take home and fry yourself. 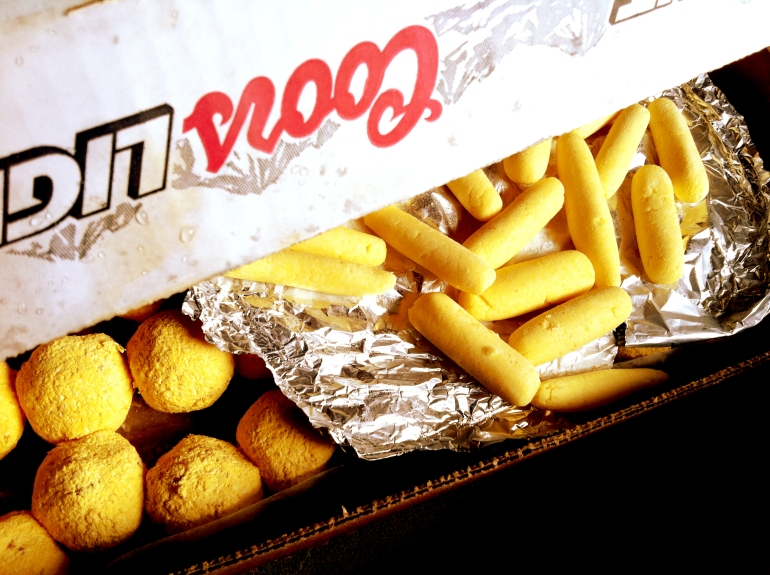 I was responsible for holding them, in the back seat. The little sticks are sweet corn meal. Thank God they weren’t cooked yet. I would have destroyed that whole box by the time we got home. 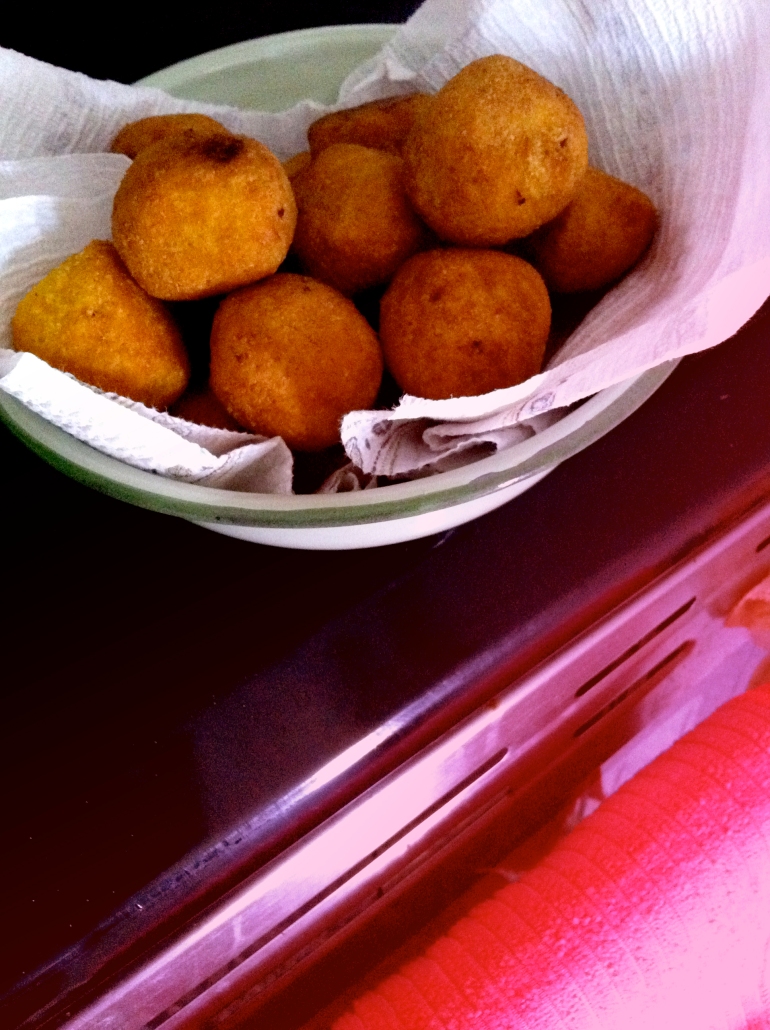 A quick jacuzzi in some hot oil, and those balls were ready for lunch! 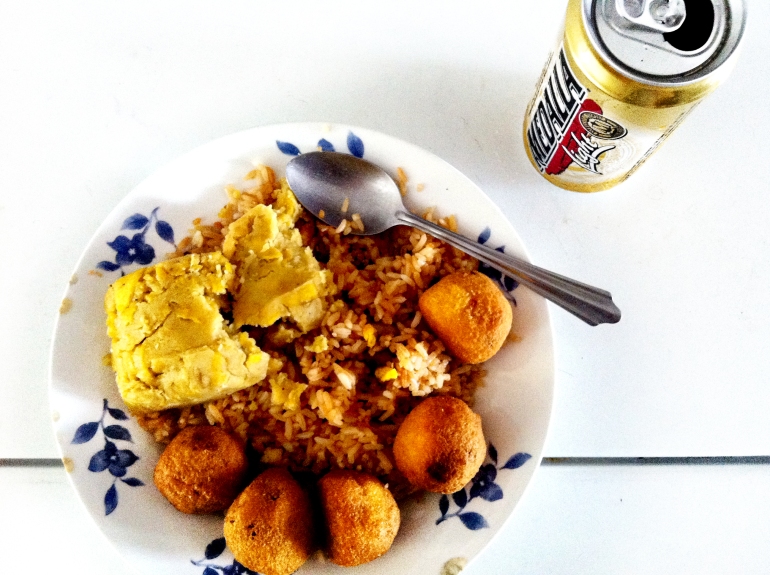 Everything in moderation. What? No. Everything, on vacation. That’s it.

You know what I like to do when I just crammed 40 fried meatballs into my gut? Get in a bikini and hit the beach! El Sol was gracing us with an impromptu matinee performance, so Ervin and I jumped into our skivvies and — cleaned the rabbit’s cage! 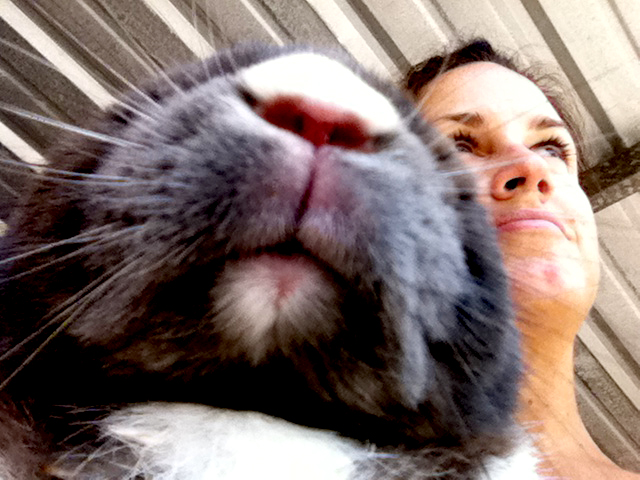 It’s customary for the guest of the household to hold the rabbit. I guess. A rabbit who does not – at any cost – want to be held. He wants to be free. Of all confines. Be it a cage, or the warm arms of an animal lov—[OUCH]! He scrambles mid-air to escape. Omg, he has sharp claws. Does anyone manicure this thing? I clutch him tighter, maneuvering around his little legs so that I have a firm grip on his belly and his ears/head. I feel his heart pounding in my palm. I whisper to him “It’s ok, bunny…. it’s ok…um… sí… señor… shhhh…..shhhh”. He is suddenly still. Is he breathing? Omg he died. He had a heart attack because of me. I killed the rabbit just by holding him. First the cows, now this. My face will appear on posters around the island “PUERTO RICAN ANIMAL KILLER” with an illustration of my confused face. “NO HABLA ESPAÑOL. REWARD.”

“Hey, so are you almost done over there?” Ervin stands in the street, power washing the poo cage with a hose. “Yep!” The rabbit’s hair is shedding itself onto my sweaty skin where it’s reattaching permanently. I look into his one giant eye – which might either be dead or Terminating me. As soon as he sees into my soul, he knows it’s a go. His back leg kicks off my forearm with a sharp stabbing jab and he struggles within my grasp. Oh, what’s up, Bunny — can’t get away because I have you in a headlock? YEAH! Point for me.

But triple points for Bunny. He managed to carve a sweet, bloody slash into my skin. I didn’t notice because I was still holding him. His warm, terrified body masking the pain. His white belly hairs soaking up my blood. But I had a feeling. I held onto him with the force of reverse Jaws Of Life, and waited for Ervin to turn off the hose. I wondered if a gash with a rabbit’s poo nail could give me a weird disease. I went through the ones I knew. Rabies. No. Herpes. No. Malaria. …No? Hepatitis. Is that a poo-borne illness? Ugh. If this rabbit gave me poo-Hep…

I washed my arms with a ton of Dial soap. Which helped me discover all the little tiny cuts Rabbit had managed. I’m looking at my wrist now — a month later, where there is one big remaining scar from Killer Bunny. A pink slash, that looks like maybe I  had a really bad night and tried to end it all, but instead of really cutting in there, I just etched in more of a flesh-wound-style call for help.

THEN, we hit the beach! Woooo! First time on the PR beach!!! 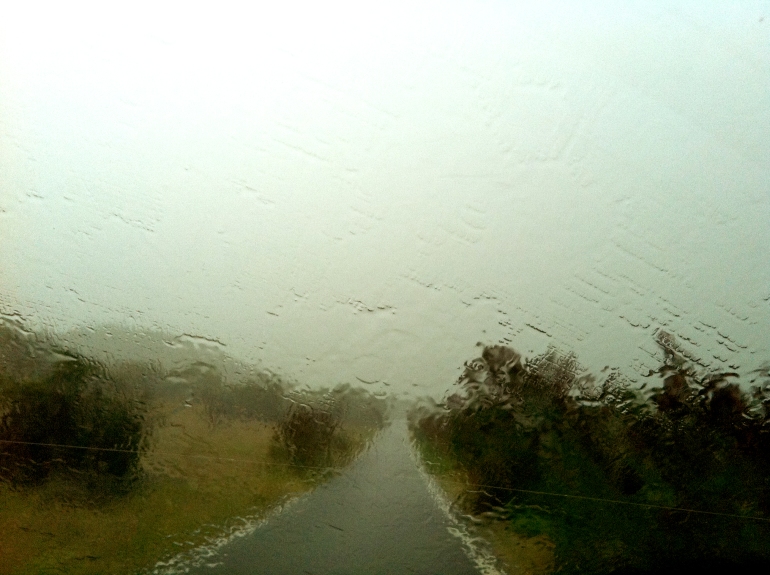 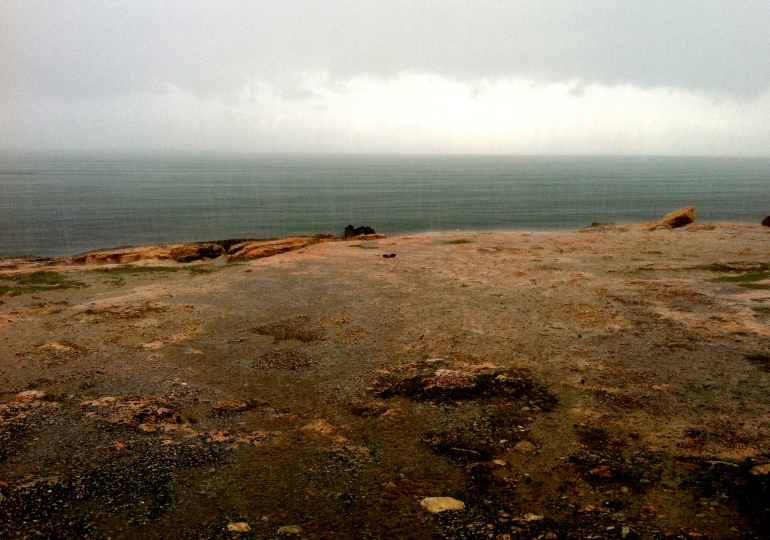 Ug. Why all this rain! We sat in the car for a while, listening to the gentle pounding on the roof. Not a patch of blue sky in sight. I knew this trip wouldn’t be about laying out on the beach, drinking cocktails out of coconuts, but this was getting ridiculous.

Thankfully, Ervin knew of a nearby boutique hotel with a cute outdoor bar, overlooking the ocean. 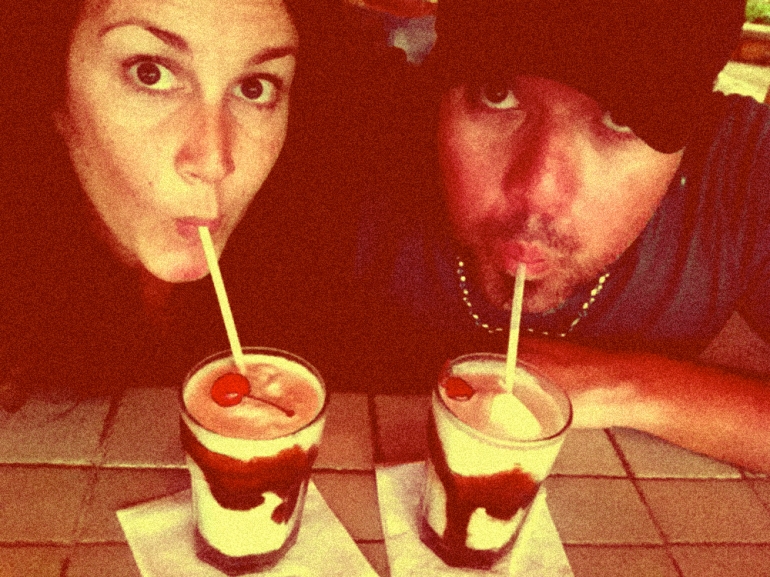 We watched tourists mill around, trying to make the best of a rainy vacation day. And we sat and talked and spent a few hours together. Just the two of us. 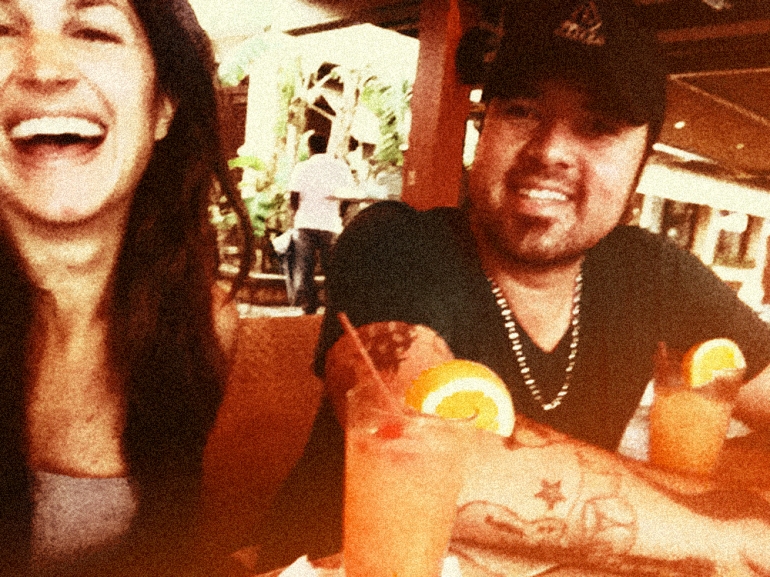 “I can’t feel my arms anymore! I love you so much! Puerto Rico is THE BEST, right?! Why don’t those cows like me?”

9 thoughts on “Puerto Rico: Day 5 (Attack of the Killer Bunny)”

My mom wrote this beautiful book and it's out today. It's about her experience in grieving my sister Kelly's death basically over a lifetime (*and still going, as anyone who has lost someone surely knows). I'm so grateful to her for sharing her most vulnerable depths and for the strength of her spirit. She could have cashed out on the mom thing long ago, but she remains one of the most compassionate, loving people I have ever met. Also, unbiased opinion, she's an amazing writer. This is my family's story, told thru a mother's lens. It's brutal, poignant and absolutely life-affirming. (Love you Mom! 💗) #griefisadancer
Me trying to MILF it up with Wiz Khalifa 😜 Full spot: link in bio #hotboxbywiz
This weekend marks my 10 year anniversary in L.A. I'm grateful for the spark that still exists in my soul, when everything about this city tries to snuff it out. For the people who are dear to my heart, and for whatever is ahead. I hope it's a great story. 💗
Happy birthday to the life of the party. And cheers to the best sh*t yet 💗🎉
So happy to celebrate these two🥂And the two in the second pic are celebrating not drunkenly falling in the pool.
✔️🇺🇸