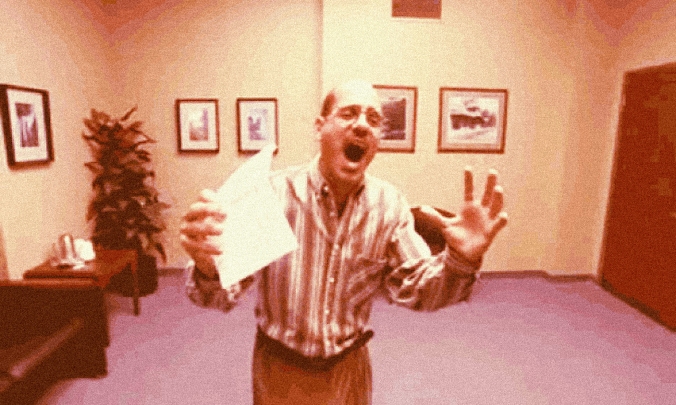 The phrase “MUST BE ABSOLUTELY BEAUTIFUL” in the casting call, threw me off. Great. It’s gonna be me and a bunch of models. My favorite pick-me-up is hanging out with drop dead gorgeous women who don’t get my sense of humor.

It was a national audition for a flower company, for V-Day 2013. I put on my make-up, while thinking “..be absolutely beautiful…”, and then clumsily applied eyeshadow like an earth-toned clown.

There was no script, so I figured I had the “acting” part in the bag. What do beautiful-looking people even have to do, on a normal day? Nothing! Just flit around and soak up the flattery like an airy spongecake.

I arrived at the casting office, happily surprised to find more of a mishmash of people’s interpretations of “beautiful”. One woman wore an off-the-shoulder top (– a risky choice. You never want casting to think you’re a ho. But it was red. Valentines-y.) Another girl wore leggings. Hmm. And another woman, who was clearly 60s+ in the face, wore a long, scraggly dark haired wig to appear to be in the vicinity of my age bracket. “It puts the lotion on its skin…” But mostly, everyone was doing “LA Beautiful”:

I signed in and went for a chair, as a tall, beach-y blonde stepped in front of me. “–Sorry” she said. Like she has never been sorry for anything in her life, ever. I sat down somewhere else.

A woman with a blouse so low her bra was hanging out, left the casting room. Following her, the assistant came out to tell us “We’re just waiting for the director to come back, so… ” 30 minutes went by, as the waiting room became lousy with models. Everyone was running out to plug meters, frantically checking clocks, rescheduling things. Finally, Bra Lady came back. Ah! She’s the casting director. She mumbled something about just having picked up her kid.

— While we all sat there, waiting for her, like diva prisoners.

Then, Bra’z chatted up an actress she knew who just arrived. They hugged and gabbed in low mumbles, as the rest of us checked our phones. Tic-toc.

Another casting director poked her head into the casting room and chatted up the assistant. “Hiiiii! I know you’re backed up, but blah blah blah ber blah blah hahahaha blah blah. M’kay.” She sneezed in the room, then left. Yum.

Finally, they took us all into the room for a group explanation of what we would be doing in the audition. We put on our best “I love whatever you say, Bra’z!” faces. She told us we would be walking into the scene, discovering a flower bouquet, reading the card that comes with it, then sellin’ our reaction to the camera. “For GODSAKES, don’t look at ME. Look at the camera!” she gently demanded.

There were 3 cards we would be opening. Which were pieces of paper that Bra’z had scribbled on. One card was supposed to be from a new boyfriend. One was from a high school sweetheart. One was from a hot and heavy lover. “It should be EASY to pick out which one you’re reading! I mean… (she reads the first one to herself) —yeah! (She silently reads the second) YES, yes, yes… (third). Yes, they’re so – it’s so clear.”

I hoped Bra’z was an amazing writer, because being not-the-person-who-wrote-the-letters, it’s impossible to know what levels of amore we were working with. You couldn’t know for sure which was which, until you had read them all. We would be auditioning, while silently reading one card at a time.

They were running 1 ½ hours behind.

Bra’z friend, who got there later than everyone else in my view, got to go in ahead of all of us. Love iiit! Then it was 3 more girls, then me.

I walked into the scene, and did this without speaking: My goodness! Look at these gorgeous flowers! For me?? Who could have—? I smelled the bunch of plastic gladiolas as if they were sent from Heaven above. Oh! A card….! I read it. It said “Hey Baby, Let’s let this Valentine’s be our best. XO.” I assumed it was the sexiest reaction. So I gave it to the camera. Oh yeah? You wanna put these plastic flowers all over me, Baby? Yeah? You like that? Ooooh yeah.

I’m so good at acting! We rolled again, with the next card. It said “Baby, It was always gonna be me and you. XO”. High school sweetheart. I toned it down Oh, hey, Buddy! I had no idea you felt — Flowers? You silly boy. Let’s get Starbucks sometime.

Awesome! I smelled the flowers a third time, and picked up the third card. It read “Heyyyy hot stuff! How about you and me make this the most romantic night of our lives”. SHIT. IT’S SEXY LOVER! SHIT. I already blew my sexy wad. So, in order to make this one look MORE sexy than the other one, I took it over the top. Take me now you half man, half goat! Ride me into the WILD! Let’s sprinkle these flowers over our own graves because we killed ourselves like Romeo and Juliet—

Me: I wanted first crack at defending myself. “OK, THIS one is Sexy Lover.”

Me: I wasn’t going down without a fight. “Haha…well, it’s a little tough to know which one’s which, until—“

Bra’z: “[EXTREMELY LOUD SIGH, THROWS ARMS IN AIR. This has probably happened with everyone so far]… Fine. You did… fine. Thanks.”

Thanks means get out. Now. Her face was back in her hands as I made my exit.

Me: “(Pretending to be totally cool with everything, grab my bag, make a little profesh eye contact and get out fast) Great! Thanks you guys!”

Technically, it’s not my fault, how it went down. I did what I could. And technically, Bra’z should have posted “Absolutely beautiful, great actress, MUST BE MIND READER” in the casting notice.

I hopped in my car, letting my absolute beauty float away into the sunset, and drove over the hill to my delivery job.

So, now I just wait by the phone for a callback, of course!

It should be any moment, so…

Image: Tobias Funke from “Arrested Development” at an audition on the show.