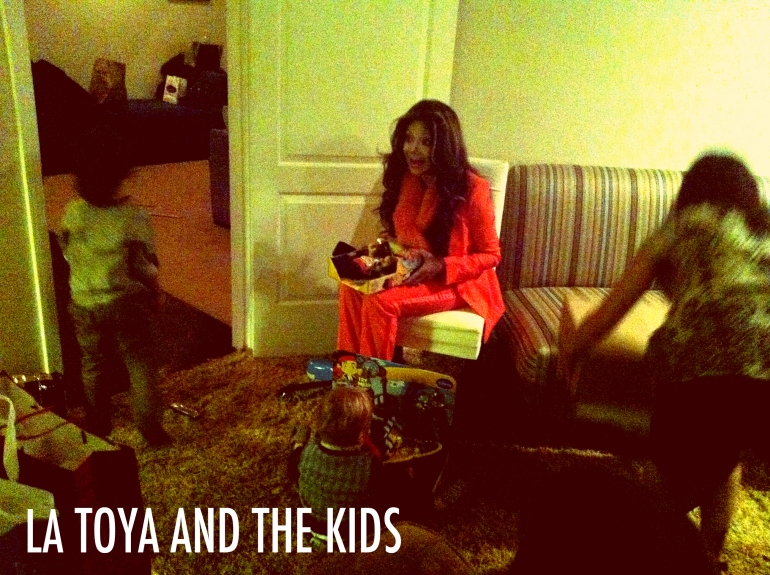 I had sucked down way too many Rum and Vanilla Cokes before I saw her, because I was nervous and trying to seem cool and relaxed. And I wondered if I was hallucinating, but — Yes, that’s La Toya. Just stopping by the Christmas Eve family dinner party I attended. Dropping off gifts for the kids. In a bright orange pantsuit. Like ya do. But I’ll get to that in a minute.

I was in Rite Aid, when I saw a display of red and green Christmas items on super sale and thought “Oh yay! Christmas is coming!” This was two days ago. Christmas already happened, you crazy B!

So, LAX-mas has come and gone and what I’ve noticed most is that I really needed a break. A change of scenery. A visit with people I knew back when I was a kid. BUT, we press on. No one ever said making it as an actor in Hollywood was easy. Or that LIFE was easy. Or that anything worth having was — y’know what I mean.

But I made the best of what I had going for me. Which was iPhone FaceTime with my lil nephew Hudson. I was trying to seem exciting, but the only thing I could think about was that I’m the most boring TV show ever. I was trying to show him the little Xmas tree my sister got me, when she said “See Baby? Árbol!”

Les: “Yeah. ‘Hudson, say árrrrbollllllll’….!” He has a Spanish-speaking daycare nanny person and he says words in Spanish before English. 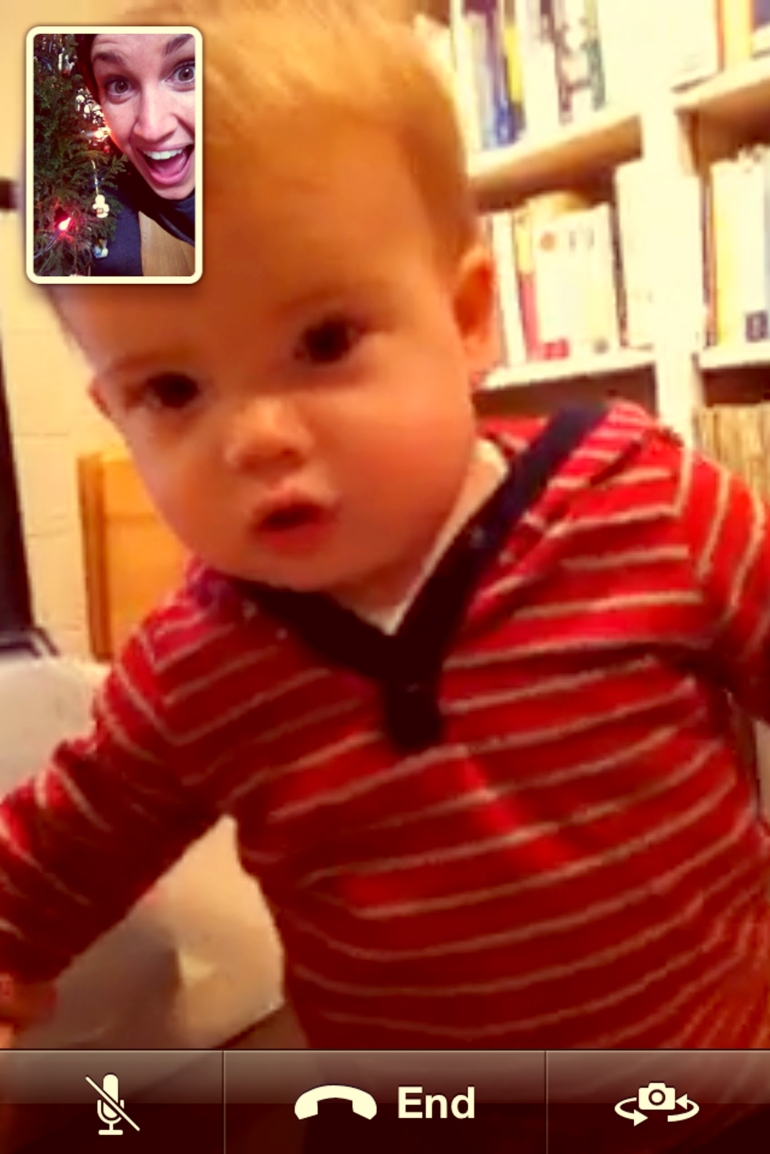 He totally gave me a kiss and waved. Then after he was done playing with his plastic golf clubs, he found a cup that was more interesting than me. I’m keeping track of this, my little friend! You will spend quality time with your AUNTIE!!!

So, I had a little fantasy of this lonely little LAX-mas turning into something super meaningful and profound, but instead, I spent Xmas eve with Ervin and Michael Jackson’s nephew. We were invited by my boss’s daughter. It’s her family. Two adorable kids and a huge house in a gated community. Almost everyone there had attended Beverly Hills High and since I learned from the pool party mac-n-cheese incident, I busted out my best “I’m TOTALLY familiar with BEVERLY HILLS” conversation.

One girl, about my age, was lamenting the fact that she wanted to EAT, but she was leaving for Mexico with a guy she didn’t know that well, in 4 days. In Pennsylvania, you’d be carbo-loading for Mexico because you don’t know when you’ll be able to eat potatoes again, exactly.

Her: “OMG, I can’t eat any of this! Ugh, God…” She swirled her cocktail in its glass and eyed the broccoli au gratin.

Me: “What do you have, 4 days? That’s totally enough time for a 3-day juice cleanse, girl!” I don’t even know if juice cleanses work – I’ve never done one because they are like $300. Of. Juice. But LA people love them.

Me: I am a *genius. I can relate to anyone. This shall be my superpower. 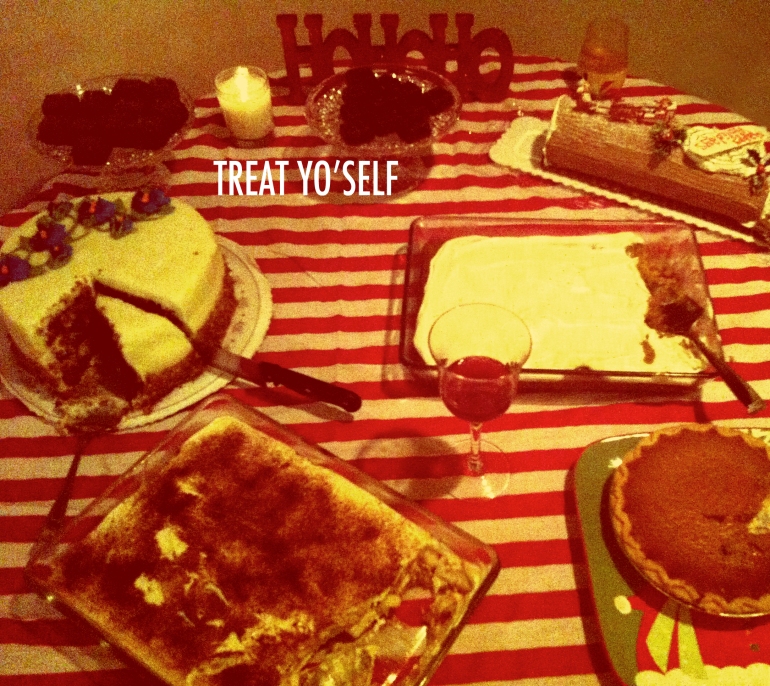 That’s a picture of a dessert table that has been “destroyed”. (Beverly Hills style). I think we ate the equivalent of 2 pieces of cake, as a group.

I chatted up a gorgeous woman named Alejandra.

Me: “Of course you are!” They have a child named “Jermajesty”, which is what I am changing my name to, momentarily.

Another of Tito’s sons arrived, with his fiance, who is part of triplet Brazilian Pop Group T-Rio. All three gorgeous matching girls introduced themselves: Thaisa, Thayana, and Thaina. Yeah. It’s either the worst naming scheme ever, or the most smartest. You just kind of slur through a name that sounds like “Tie-EE-shmehhh” and you’ll be right.

A group of dudes dressed in suits, hustled in, having just stopped by the Kardashian Xmas party. Obviously.

In case you didn’t get one, this is what it would look like if you had received a Kardashian family Xmas card: Depending when they shot this, baby KimYe may be in the picture as well…!

Moments later, La Toya arrived, arms full of gifts. Ervin, who was buzzy on rum-n-cokes whispered “I THINK THAT’S LA TOYA…” She looks the same as she ever did. There’s a thing in Hollywood, where women age, then plateau out, then get younger looking, then kind of hover around looking-like-50-years-old until the day they die.

That’s what unlimited dollars will do for you! They will not, however, enable you to maintain this in overhead lighting. It was a weird, sort of socially adventurous Christmas. I definitely missed my family. And I wished I were around people that I knew better. But I was thankful to be invited to “Everyone But The Jackson 5” Christmas. It was a good time. I had a dream once, about being part of the Jackson 5. We were getting into a limo, wearing purple sequin jumpsuits, on the way to our show. I was the white one. This was the closest I’ll ever get to that dream coming true.

At the end of almost every day in LA, there’s a drop dead gorgeous sunset. Usually I’m working and have barely the chance to notice it. But we drove out to the beach one evening, and watched the sun slowly sink into the Pacific Ocean.

Things are overwhelming and difficult and I feel like I have never worked this hard, in my life. But I have hope for this coming year. That things will start feeling less like surviving, and more like thriving.

Looking forward to it, for us all.

*Just so you know I haven’t lost my mind, I also told her “Good guys like girls who can eat.” She said “Really?“. “YESH. ABSHOLUTELY.” I replied with a mouth full of cake Ervin just stuffed in my face.

7 thoughts on “So Then La Toya Jackson Showed Up.”

Schooling young Colin Kaepernick in Ep 4 of NETFLIX *Colin In Black & White*!
I was scared for real. 😳 So much fun getting to act in this thriller with such an awesome cast and crew!
Trying not to flex *too hard* in front of my hubs in a new spot by @jeanlucslagle 🛠🦷😜
My mom wrote this beautiful book and it's out today. It's about her experience in grieving my sister Kelly's death basically over a lifetime (*and still going, as anyone who has lost someone surely knows). I'm so grateful to her for sharing her most vulnerable depths and for the strength of her spirit. She could have cashed out on the mom thing long ago, but she remains one of the most compassionate, loving people I have ever met. Also, unbiased opinion, she's an amazing writer. This is my family's story, told thru a mother's lens. It's brutal, poignant and absolutely life-affirming. (Love you Mom! 💗) #griefisadancer
It's Lemmy's 2nd bday. He's the class clown and the sweetest sweetie. So grateful to share in the joy he brings to everyone he meets. Animals seem to travel different roads straight to the soul. 💗 "Butter" [Prod. By Lukrembo]
Me trying to MILF it up with Wiz Khalifa 😜 Full spot: link in bio #hotboxbywiz