He looked a bit Pillsbury. Like room-temp pizza dough, with tattoos and sort of a tan, in the shape of a person. But he drove a Mercedes-Benz G63 AMG out of the parking lot, so, I mean, what respectable woman wouldn’t forgive the arms…

I had a delivery to make from a spendy Italian restaurant in Beverly Hills, to an even fancier luxury condo building nearby. The name on the order was “Maloof”.

But – no way. People have the same last names around here. It’s like everyone is “Bentley Bellagio Bel Air III”.

I collected the bags of food and hopped back in my dusty, beat up car, to drive to this Maloof person. There were simple, comforting Italian dishes, along with an assortment of cookies. The smell was killing me. I’m naming my first born “Pastacheese.”

I arrived at the front desk of the building.

“Hi! I have a food delivery for Maloof.”

Concierge: “Great! I’ll give her a call…”

Other concierge (about the first concierge): “Dude.” I just love it when guys call me dude. “He totally wrecked her car the other day.”

Concierge: (Mouthing this, while waiting for Adrienne to pick up) “It was so bad. I almost got fired.”

I made a pained, yucky face.

Finally I got clearance to go up to her condo on the 25th floor. Via the back entrance elevator. For service people. Trash, repairs, deliveries from Frontgate, and me.

The housekeeper answered, gave me a good tip, and closed the door. I pressed the elevator call button and waited.

The doorknob turned again and out walked a guy about my age. I remembered Adrienne had kids on the show, but I wondered if she had older ones that weren’t mentioned. Like, a really old one.

Me: I was waiting in a tiny hall for the one elevator I had to get clearance to ride. How could I be lost. “Heh. No, I just dropped off some food here. Now I’m waiting for the elevator.”

The elevator arrived and we stepped inside. He was wearing workout clothes, without a bead of sweat upon him. Perfect hair.

Me: “You look like you’re gonna go work out.”

He made the motion of looking at his arm tattoos, and I said what I was thinking.

Him: (Silence. Staring ahead.)

Me: Oh no. Is he ignoring me? Did he not hear my joke? I think I said it at normal volume. It’s a joke! Come on – don’t be one of those people who takes yourself seriously… AAAAH now I feel awkward!

He had the blank face of someone who tires easily of banal elevator conversation, and preferred, rather, to check off a mental to-do list. Wallet – check. Phone – check. Tattoos still there – check.

It was the longest elevator ride ever. If I could have activated any of the other floors, I would have freed myself immediately. But lo. “L” for lobby, here I slowly come.

Finally. He let me out of the elevator first. Or I ran out. I don’t know. I lost all sensation in my body.

The bunch of concierge dudes asked me how it went and I spewed, “Success! No one’s gonna starve on my watch!” and I speedwalked out to my car and Googled “Ryan Maloof”.

Which isn’t his name. 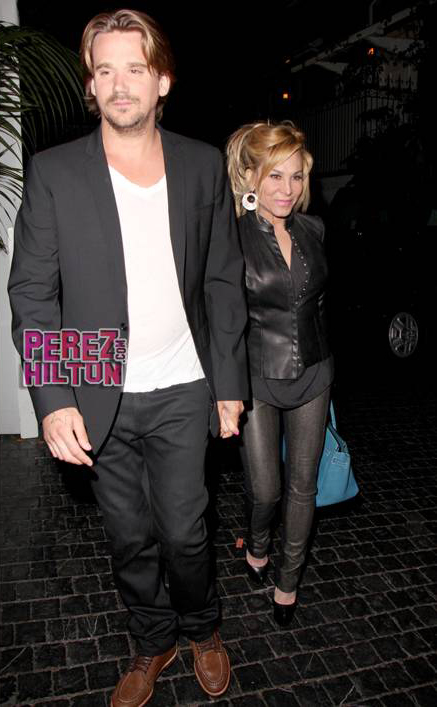 His name is Ryan Stewart, and he’s Rod Stewart’s 32 year old son, and the confirmed boy-toy of Adrienne Maloof who recently divorced her surgeon ex-husband.

I sat in my car as the lingering ghost of linguini alfredo lovingly hugged my face, and I thought… this is why I like this job. The pay? Crap. But awkward elevator rides with celebrities who are ignoring me? Priceless.

Image of Adrienne,  Image from Perez