The best part of the whole thing was that I got to hang out for almost an entire week, with my fam. The worst part was having to catch a flight back to LA, at the end of it. Oh. And also how Dairy Queen Blizzards aren’t bottomless. If people say endings are the beginning of something else, they were talking about ice cream mixed with candy. And the beginnings of Diabetes.

This was my first beach vacation with my family since, like, the late nineties. My nephew Hudson is almost two, so I wanted to scoop him up and gobble up his cheeks. Instantly, I learned something about almost-two-year-olds. They go through phases. Like, “Mama’s Boy”. Mama’s Boy no likey Aunt Bubbles (*that’s my chosen nickname. A word he likes and can say already) picking him up. My Plan B was “get on the level”.

Les: “Smell his feet. He loves this.” 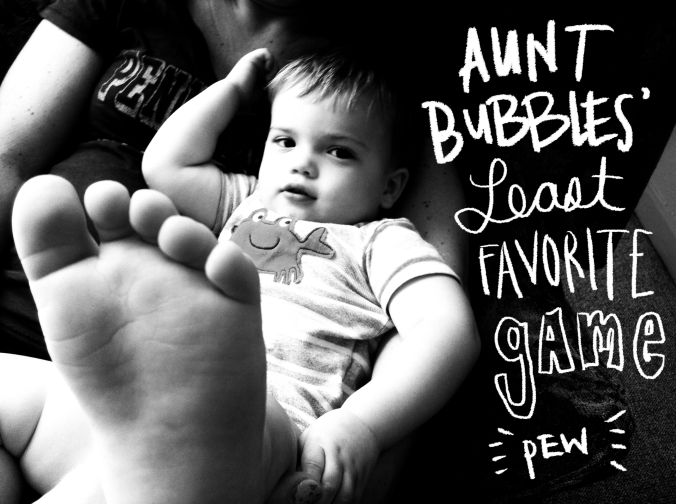 Little boys are the grossest. He’s stinking cute though, and therefore is irresistible to me. Of course I still wanted to squeeze him.

I remember the family vacations of yore, when my sister and I would listen to our walkmen (I said it was the ’90s!), whilst oiled up, smelling like baking coconuts, “laying out” on the beach, wishing so hard for something cool to happen. Now, we all slather on the SPF100, park it in the shade, and appreciate that just being able to hang out IS the cool thing happening. 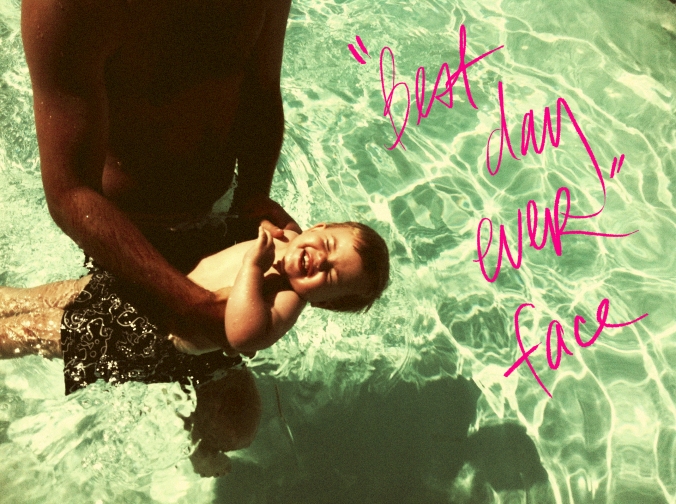 OK, you just have to deal with this adorable family photo.

I wanna say I’ve never eaten so much in my life, but that’s not true. And that’s what vacation is for, right? Especially if you’re within walking distance of the place where the sea creatures lived before you ate them.

Heath steamed like so many clams, none of us could keep up. Combined with shrimp, pulled pork and North Carolina style BBQ sauce? Shut yo mouth.

This was my contribution to the supper that evening:

To put a little backstory on this, I was making a salad. My Mom, who was cooking other things, told me I could thaw some frozen peas on plates – and just throw them into the salad.

Mom: “Just put them in, straight from the bag. They’re delicious!”

Me: (Tasting another ice pea from a different region of the paper plate) It’s not cold salad, it’s room-temp.”

Heath (My brother-in-law, popping a Corona): “What is that, salad?”

Me: “YES! DELICIOUS FROZEN PEA AND PAPER PLATE SALAD AT THE MOMENT.”

Me: “I have to put these peas in the microwave.”

Mom: “Just throw them in the salad! They’ll be fine!”

Me: (Testing another completely frozen pea) “Mom! They are frozen! This salad is sucking…”

We all destroyed like a million shrimp and clams and Carolina pulled pork. And a little serving of my signature magical pea salad.

My sister and I have no current photos of us together, so we tried to get some good ones — after I took this artistic photo of her sideburns. We both have them. As my boyfriend has made known. (I’m talking about you, Ervin! Thank you for always tucking my ‘burns behind my ear, so I feel like a pretty lady…)

Here was an attempt at a sisterly portrait. 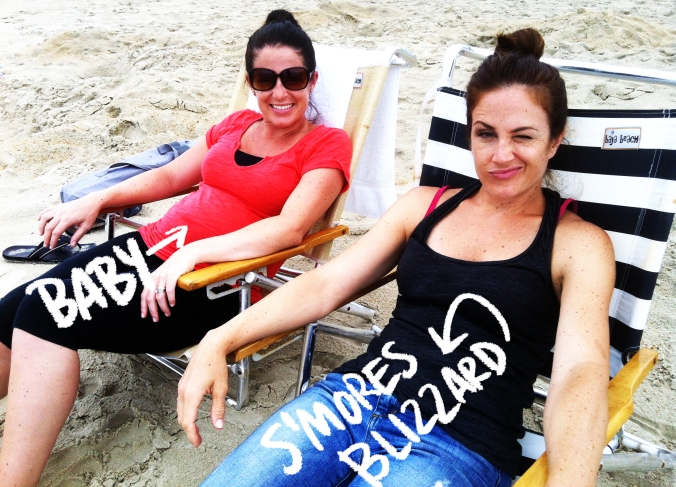 Les was workin it. I think the zit that was forming under my eyebrow skin was distracting me… 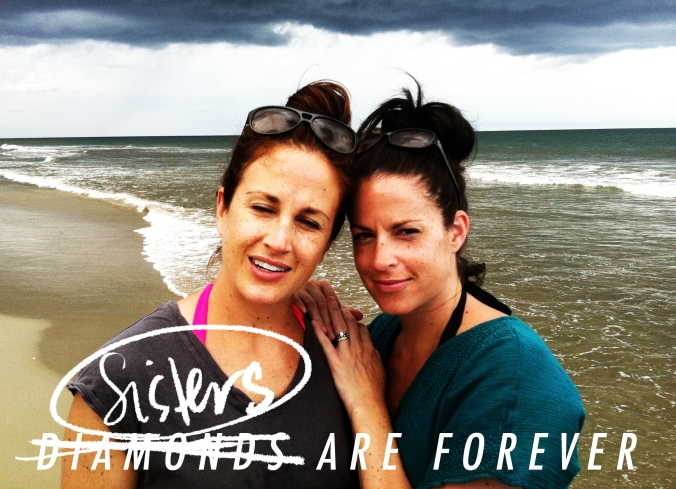 One afternoon Heath, Les and I snuck out while Mom and Dad distracted Hudson, and headed to a little town called Manteo. We walked into a quaint fabric store where a nice older woman said “Is this your first time in the store?”, I said “Yes”, she told us about the interesting necktie purses Cindy was making, and we decided to leave Manteo.

— and try our luck a a super popular Diners Drive-Ins and Dives pick Tortuga’s Lie. The food is amazing. I’ve never had such flavorful fish tacos in all my life. And the fries are deliciously salty and peppery. But the highlight was my drink. The “Shark Attack”, with an actual plastic shark in it, that you flip over, dumping the contents of its guts into your glass. What’s not to love! It was the day I first witnessed the Sharknado movie trailer, so sharks were on my mind menu.

My Dad made brownies (to the amazement of my Mom, who was shocked that he could measure anything). He put the pan in the oven and joined all of us in the living room, brownie-batter-bowl in hand.

Dad: “Anybody wanna lick the bowl?” I turned to see a bowl, scraped CLEAN, by OCD Mr. Martha Stewart.

Dad: “Yes there is!” He’s too thorough for any possible mooching.

He managed to scrape out 1/4 teaspoon, anyway…

This picture makes me laugh. Hudson, who became a fearless wave-jumper, thanks to a little positive peer pressure, looks on. As his comrades pose for their Mom’s camera. I was hoping so hard that he would run over and join them, but he kept a comfortably awkward distance.

The fact that he’s probably a blurry little weirdo in the background of their photos, pleases me infinitely.

Another good shot, was taken by my Mom. Using the panorama function on her new iPhone 5. A Dali-esque scene atop the 100-ft sand dunes at Jockey’s Ridge. Near the Wright Brother’s Aviation Museum. Just north of the —- wait, yuck. This is getting way too historical.

Look at my arms. All of them.

And finally, a family photo that I think really represents our week together.

He actually wasn’t angry at the time. It was the wind. And his concentrating little eyebrows. And the placement of his finger. OK, he looks exactly like Chucky, except I’m pretty sure he’s still Hudson on the inside.

I love these people. And I miss them already. Super looking forward to the next time I get to hang out with them again.