So, I did this infomercial for The Ellen Show. It aired last Friday and is called Ellen’s Better Baby, where I play a Mom, while wearing my signature pink NBC Network TV cardigan. I dunno – I just happened to be wearing it for this, and for that $#*@&%*# game show, back in December. JEREMY!! #neverforget

Here was my baby on set.

A total pleasure to work with. He literally just occupied himself while I chatted with the other actors and crew. A joy.

We shot in the home of my friend Kevin Leman, head writer on the show. He has like, too many Emmy’s to fit into one selfie — it’s disgusting, how talented and smart and funny and genuinely awesome he is. Disgusting.

It was easy-breezy-cheesy acting until we talked about “the carpool lane shot”. Carpool lane what now? This is green screen, right? Somebody?

The plan was for me to drive someone else’s car (which is always awkward at first), on the highway (“The 101” as LA people know it), during actual rush hour (eeeech!), in the carpool lane with a fake 2nd passenger (totally illegal, but it’s art or something, so whatever – I’ll take a nite in the clinker. Clink? Fuzz… joint? Oh God, what is the lingo — I’m going to be made someone’s b**** within 30 seconds behind bars), while being filmed by 2 dashboard cameras, and another in a Prius that would be following alongside me.

O….k….! I had never driven on camera before. And nevermind all the mental insanity of LA freeway driving, the point was to do one simple action: Smile and look down at the baby. What? SO EASY, you’re totally thinking!

(Aaaaaand merge onto the highway…)

Immediately I realized I was driving at a speed reserved for Asian Great-Grandmothers. I jammed myself in, across 5 lanes of traffic to illegally cross the double yellow lines, into the carpool lane. WITH MY CARPOOL BUDDY WHO IS A DOLLBABY! I feared the worst (maleficent bee invasion), but the worst was actually the woman I could see in my rear view mirror, who was pissed we weren’t going 95MPH. And she was gonna tell me about it, through evil mascara eyes, and honking m.o.r.s.e code.

I was listening to the director cue me on speakerphone “DRIVE FASTER, LAUREN”. I sped up to, oh — I dunno… 62… as the exterior camera car followed along with me. “OK, DRIVE FASTER. LIKE, WITH THE SPEED OF TRAFFIC.” I pushed the pedal to the  all-weather carpet and made it to maybe 70 max. HONK HONNNNNNK HONK HA-HONNNNNNK. (Does that mean “I like your hair”?).

And that was a wrap! It was mildly comforting that Adam who wrote the spot, and whose car I was driving, said that if I wrecked the car, The Ellen Show would probably comp him a new one. It did not keep me from pitting out in my cardi. I sweat because I’m healthy! (– Right?)

Anyway, it was a TOTAL blast to shoot — race car driving and all — and I think it turned out great. Ellen and her people are genius. I was so happy to get to be part of the fun, for a day.

And here is the proof I’ll be keeping forever. We’re almost touching… 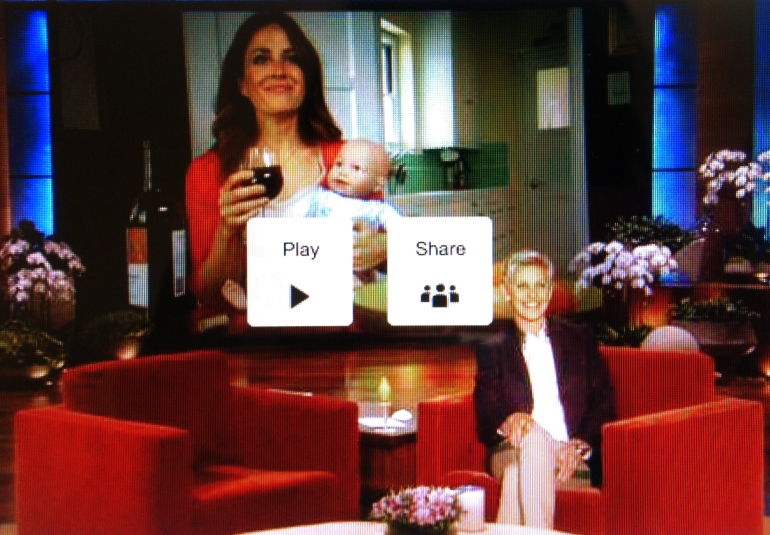